‘Real Housewives of Atlanta’ star Cynthia Bailey’s ex-husband, Peter Thomas, spent the night in a Miami jail after being arrested on fraud charges.

A link has been sent to your friend’s email address.

A link has been posted to your Facebook feed. 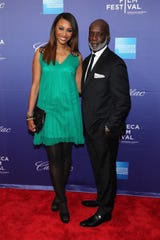 MIAMI – Authorities say the ex-husband of “The Real Housewives of Atlanta” star Cynthia Bailey spent the night in a Miami jail after being arrested on fraud charges.

Peter Thomas was arrested Friday at Miami International Airport on a fugitive warrant.

Miami-Dade police told news outlets the warrant for Thomas, 58, is from Louisiana, where he is accused of writing fraudulent checks.

No bond has been set.

In an official statement, Thomas said the allegations were false. He said he will be “acquitted from any wrongdoing.”

Thomas is the owner of a sports bar and a club in Charlotte, North Carolina.

Thomas and Bailey married in a lavish wedding on Season 3 of the Bravo series, then divorced in 2017, after almost seven years of marriage. He was honored with a Made Man Award in December at the Embassy of Ghana in Washington.

“Real Housewives of Atlanta” is now in Season 11.

Jon Cryer reveals why he…

How to Train Your Dragon:…

Hozier on love, politics, and…