There was no sophomore slump for John Mulaney in his second shot at hosting Saturday Night Live in less than a year.

Mulaney, a former SNL writer, had a high bar to scale given that his last outing included the brilliant “Diner Lobster” sketch but, with help from friend Bill Hader and a very game cast, the episode included several slam dunk sketches and less filler than usual.

As expected the show kicked off with the C-Span coverage of the Congressional Oversight Committee Hearings of Michael Cohen, once again played by Ben Stiller.  Kenan Thompson as Rep. Elijah Cummings brought the proceedings to order asking people not to “ooh and aah” since “this is not ‘Married… with Children.’” He teases a “performance” later by Alexandria Ocasio-Cortez (Melissa Villasenor still being underutilized for a personality that seems an obvious choice for more screen time). Stiller-as-Cohen notes at the top of his statement that he had some help from the guys who wrote the Oscar-winning Green Book. The sketch is fine with a coterie of the cast running through solid impressions of the major players with surprise guest Hader relishing his role as agitated Rep. Jim Jordan. The best bits here involve Stiller randomly reciting lyrics from Natalie Imbruglia’s “Torn” as part of his statement and lines like “In conclusion, I know that I was wrong and I know it because I got caught.” (The true bummer of the whole show is the appearance of Hader prompting hopes that Stefon– whom he co-created with Mulaney— might show up on “Weekend Update.” He did not. Maybe he was busy at New York’s hottest club, Spicy?)

Like most comics, Mulaney stayed in his wheelhouse with a lengthy stretch of straight stand-up. (The singing and dancing that is often seen here came later.) Topics included his parents inquiry into whether his now wife, who is Jewish, might consider converting to Catholicism. He joked about coming home with a brochure: “Hey honey, allow me to tell you about an exciting, not new, organization. Don’t Google us! You know that strange look of shame and unhappiness I have in my eyes at all times especially after sex and it was all forced on me at birth?  What if you voluntarily signed up for it?”

Hader returns for this painfully hilarious game show in which, as vaguely sinister host Vince Blight (Hader) says, “We show you a person, you tell us their name.” The contestants Doug (Mulaney) and Courtney (Cecily Strong) have no trouble identifying famous pop culture figures like Chrissy Teigen but stumble when trying to ID their best friend’s girlfriend of four years or the wife of a partner at their advertising firm. “What kind of horrible game show is this?” asks Doug. The best kind.

While “Diner Lobster” had the benefit of surprise, “Bodega Bathroom” proves to be a sterling sequel. Charlie (Pete Davidson) and his friend (Chris Redd) are chatting with the man behind the cash register (Mulaney) when Charlie, appallingly, asks for the key to the bathroom. This sketch has everything: a visual joke of the key to the bathroom being attached to a cinder block, a talking toilet, Russian Oreos and Oompa Loompas that are actually Sour Patch Kids who have been in the bodega so long that they’ve come to life. It also has a huge swath of the cast who are clearly having a great time. The musical parodies include Willy Wonka & the Chocolate Factory, Little Shop of Horrors, Cats and Rent. (“525,000 unrelated things.”)

While we might not have time, or even want, to unpack the various elements at the root of why this sketch hit so well on so many different levels — an interracial couple Daniel and Lisa (Mulaney and Ego Nwodim) attend a wedding reception primarily attended by members of her black family that he thinks he has not met– it’s partly because being a stiff is so core to Mulaney’s shtick that watching him do the dance moves from Beyonce’s “Single Ladies” and pulling not one, but two, church fans from his back pocket, will never not be funny.

In a very short version of the news, few jokes landed big laughs, more of a steady chuckle, as Colin Jost and Michael Che ran through topics including Bryce Harper signing to the Phillies, the Cohen hearings, Trump’s CPAC speech and talks with Kim Jong-un. Jost did note how many weird details came up during the Cohen proceedings like Trump allegedly inflating his net worth by $4 billion to buy the Buffalo Bills. Jost: “It’s like using a fake ID to get into a Nickelback concert.” Kate McKinnon and Aidy Bryant appeared as sisters Vaneta and Wylene, purveyors of meat from Smokery Farms who’s business is being ruined by vegans. The biggest laughs came when the pair and Jost began struggling to keep from breaking when they began discussing an, apparently very aromatic, basket featuring a variety of cuts of meat that came only “from animals that are individually stupid and bad” to make people more comfortable eating them.

The amiable pop country star rolled through two new tunes from his forthcoming album Center Point Road, the mid tempo ode to his wife “Look What God Gave Her” — co-written by his dad Rhett Akins– and the party jam “Don’t Threaten Me With a Good Time,” which shined a bit of light on his two female back-up vocalists.

While this sketch, actually one of the night’s shortest, wasn’t among the top three it had a few laughs and some interesting tension.

The set up, famous lawyers– Alan Dershowitz (Mulaney), Jeanine Pirro (Strong), Michael Avenatti (Davidson), Rudy Giuliani (Kate McKinnon) and Cellino & Barnes (Alex Moffat and Kyle Mooney) — hear from celebrities in trouble to decide whether they will help them. Robert Kraft (Beck Bennett) drew the expected jokes. But when Redd entered as Empire star Jussie Smollett the audience audibly gasped. Asked why he was there, Redd-as-Smollet answered “I broke humanity.”

Avenatti was apparently watching and decided to respond to Davidson’s portrayal with a pair of jokey tweets written in the style of President Trump.

After the show Mulaney SNL posted a photo of Mulaney and Davidson wearing matching t-shirts emblazoned with Mulaney’s wife’s face. 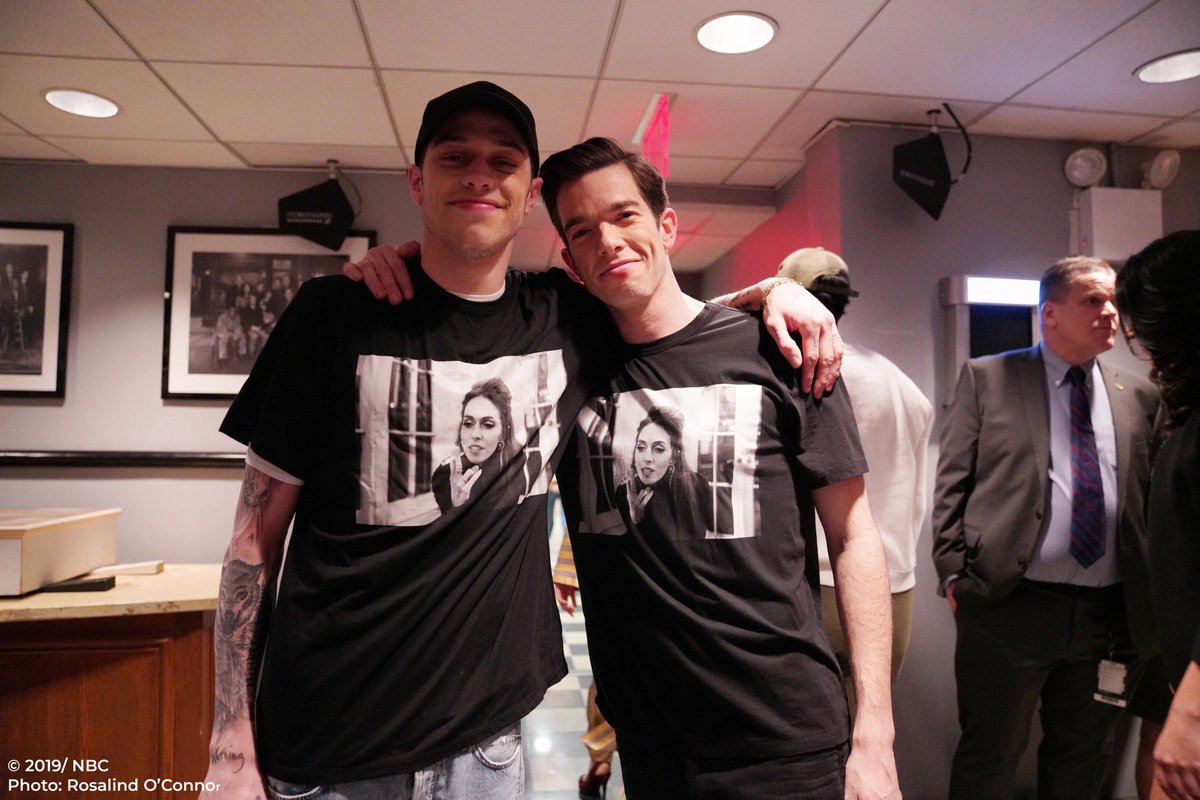 The original late-night comedy sketch show from the one and only Lorne Micheals.

Jon Cryer reveals why he…

How to Train Your Dragon:…

Hozier on love, politics, and…